Data released by the Society of Motor Manufacturers and Traders show that the UK’s new car market was down 27.4% in November. GlobalData’s David Leggett commented on the news by saying:

“November’s big market contraction is no surprise given the imposition of a second lockdown in England that shuttered dealers during the month. The overall decline was however, softened by ‘click and collect’ capabilities.

“GlobalData’s estimate for 2020 puts the UK’s light vehicle market at a little over 1.8 million units, around a third down on 2019’s level, illustrating the scale of the hit the market has taken this year due to the COVID-19 crisis and its economic fallout.

“However, there was some positive news in rising electric car sales in November. Battery electric vehicles (BEV) accounted for 9.1% of the UK’s new car market last month (versus 3% in November of last year) and are rapidly catching the shrinking pure diesel share (just 14% in November).

“Indeed, if we add plug-in hybrids (6.8% share) to the BEV share, electrified vehicles were at an impressive 15.9% of the UK’s new car market in November, exceeding the share of pure diesels at 14%.

“The direction of travel looks pretty clear and we’ll see the trend continue in 2021 as more electric cars go on sale. Electric cars are now moving from niche to mainstream.”

Renault Trucks is broadening its all-electric Z.E. range in an effort to help its customers speed up their transition to clean transportation. Renault Trucks D and D Wide Z.E can now be specified with 66 kWh battery packs that will give an impressive operating range of up to 400km.

A range of new battery configurations is also now available on the Renault Trucks Range D and D Wide ZE models, based on a new 66 kWh battery pack, and vehicles can now be specified in one of five configurations, from 200 kWh up to 400 kWh, with a range of 400 km in a single charge for the 400 kWh pack which will give transport operators the ability to transport more goods further than they have been able to before. 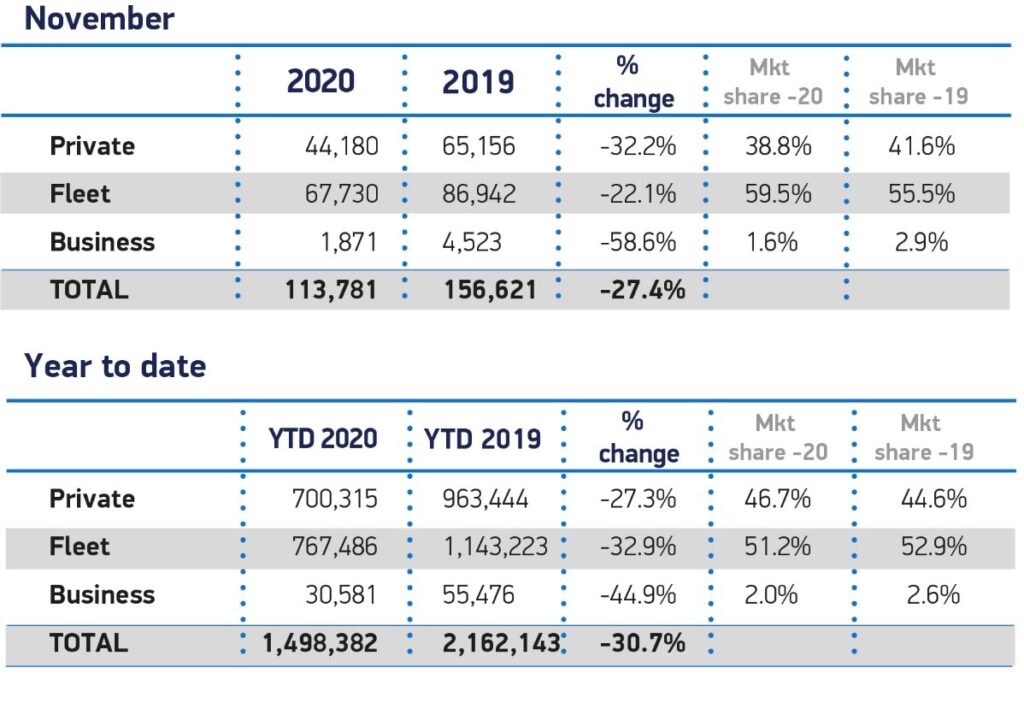 Figures courtesy of the SMMT

Registrations for new light commercial vehicles jn the UK rose 8.8% in November according to the latest figures published by the Society of Motor Manufacturers and Traders thanks to the sector responding to growing demand as businesses scaled up online delivery operations around the country.

At the same time, demand for battery electric and plug-in hybrid LCVs grew by 79.7% compared with November last year.

Sales continues to grow globally for Volvo Cars in November, with a 6.4% increase in volumes compared with November last year. This was driven by a strong performance in China and the US, where losses from earlier COVID-19 shut-downs have fully recovered.

66,579 cars were sold during the month of November with volume growth being driven by continued strong demand for the company’s award-winning SUV range.

Volvo’s share of Recharge models with a fully electric or plug-in hybrid powertrain, more than doubled year-to-date compared with the first 11 months of last year, and now make up an impressive 16.4% of global sales. The share was 27.8% in Europe for the same period.