The research also revealed that European EV drivers are becoming trailblazers on European roads, covering on average more than 14,200km yearly compared with their ICE driver counterparts, who are averaging 13,600km a year, indicating a bright future for sustainable mobility.

“This research reiterates that electric driving is not only a smart option beneficial to the environment but also a fun, exciting and convenient choice for the owners. It is no surprise that people now drive EV further than ICE cars. We are confident that with more EV on the road dispelling myths, range anxiety will soon be in the past,”

Audi UK has launched a new version of its EV&me app, which is available via the Android and Apple stores. It has been designed to help customers make the switch to a fully electric (BEV) or plug-in hybrid (PHEV) Audi models by allowing them to compare useful performance data, charging times, and running costs between models.

You are able to see the cost savings of switching from a petrol or diesel vehicle to an Audi BEV or PHEV and more accurate cost savings can be discovered by enabling auto-tracking, which uses real-time data. Once six journeys have been completed the app can then calculate the possible savings by switching to a BEV or PHEV.

Andrew Doyle, Director at Audi UK, said: “There are endless benefits to switching to plug-in power and Audi’s new and updated EV&me app now makes them clear for all to see. From an environmental standpoint, switching to electric power is central to Audi’s future but the financial benefits of making the switch can also be reaped by our customers. Making the switch to electric power is easier than ever thanks to the EV&me app; with our experts at your very fingertips we can help guide you through the process and ensure no question is left unanswered.” 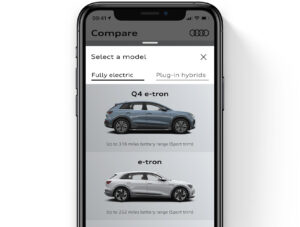 Renault electric vehicles are helping Lambeth Council to lead by example in its drive to improve air quality in what has been one of the most polluted areas in London, with the aim of becoming a carbon-neutral council by 2030.

Details on the Renault E-Tech PRO+ commercial vehicle range can be found at www.renault.co.uk

A joint venture between Renault Group and Plug Power Inc., a world leader in turnkey hydrogen and fuel cell solutions, has been formed to launch HYVIA.

HYVIA is a contraction of “HY” for hydrogen and the Latin word “VIA” for road, embodying the ambition to open a new path towards low-carbon mobility. Hydrogen fuel cells are the unparalleled energy solution for commercial vehicles such as LCVs that require greater range and shorter refuelling time to meet the operational demands of businesses.

The first three fuel cell vehicles to be produced by HYVIA will be based on the Renault Master platform and will be available in Europe by the end of 2021, along with the deployment of charging stations and supply of green hydrogen.

New car registrations in May reached 156,737 units, following the first full month of showrooms being open, according to the latest figures from the Society of Motor Manufacturers and Traders. This figure represents an almost eightfold increase on the same month last year, but is down -14.7% on pre-pandemic May 2019, and -13.2% on the 10-year May average.

This increase is in line with the most recent industry outlook published in April, with the sector anticipating around 1.86 million registrations by the end of the year, with 723,845 achieved so far.

Fleet registrations grew more than twice as fast as private purchases in May, with large fleets accounting for 50.7% of all new vehicles on the road, demonstrating improving business confidence compared to the same month last year.