Last week Ford announced that will be committing to go all-in on its electric passenger vehicles and to substantially grow and electrify its leading commercial vehicle business in Europe.

“We successfully restructured Ford of Europe and returned to profitability in the fourth quarter of 2020. Now we are charging into an all-electric future in Europe with expressive new vehicles and a world-class connected customer experience,”

“We expect to continue our strong momentum this year in Europe and remain on track to deliver our goal of a six percent EBIT margin as part of Ford’s plan to turnaround our global automotive operations.”

A new $1 billion investment to modernize its vehicle assembly facility in Cologne, Germany, one of its largest manufacturing centres in Europe and the home of Ford of Europe, will spearhead Ford’s advance into an all-electric future. The investment will transform the existing vehicle assembly operations into the Ford Cologne Electrification Centre for the manufacture of electric vehicles, Ford’s first such facility in Europe. 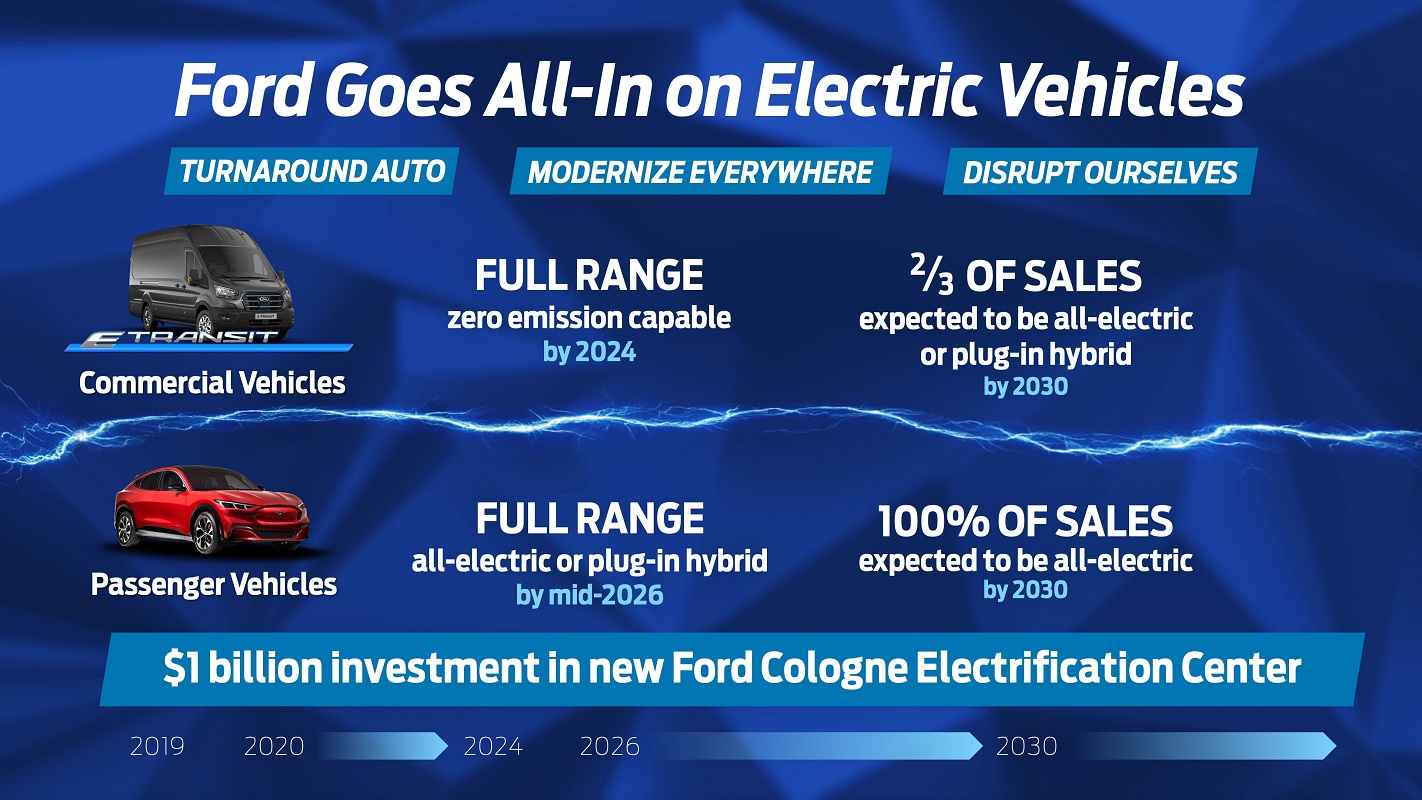 Proterra to supply vehicle batteries for the full-electric Volta Zero

Volta Zero vehicles are scheduled to start customer trials later this year, with tens of thousands of trucks expected on the roads soon after series production starts next year.

The Proterra-supplied battery will give the Volta Zero a range of 200kms on a single charge, which should be more than enough for most inner city logistics and distribution vehicles, which tend to spend much of their time in slow-moving start/stop traffic.

This will be Proterra’s first entry into the European truck market. However, their battery technology has been well tested and proven over 17 million miles driven by its own transit vehicles. The company has also been chosen by other world-class commercial vehicle manufacturers to electrify their delivery vans, school buses, coaches, low-floor shuttles and construction equipment.

“Embracing clean, quiet transportation for all not only benefits how we move people around cities and towns, but also how we provide goods and services to the communities we live in. Proterra is excited to work with Volta Trucks as we accelerate the transition to 100% clean transportation and deliver Proterra Powered clean energy vehicles to communities across Europe.”

“Proterra and Volta Trucks share a common vision of clean, healthy communities served by zero-emission, electric vehicles. We look forward to building our relationship together as we support Volta Trucks in the development of the revolutionary Volta Zero commercial vehicle.”

“I’m delighted to welcome Proterra – a world-class innovative engineering partner – to the supply chain for the Volta Zero. When talking to our extensive group of customers, vehicle range is uppermost in their minds as it sits at the heart of the vehicle’s ability to deliver for them. It was therefore imperative that we work with an industry-leader to ensure the quality, longevity, and safe performance of the battery. Proterra’s cutting-edge but well-proven battery technology perfectly delivers all of this for us and our customers.”

“We urgently need more charging points to accelerate our transition to electric motoring, so this announcement is welcome and a step in the right direction. As we race towards the phase out of sales of new petrol and diesel cars and vans by 2030, we need to accelerate the expansion of the electric vehicle charging network. An electric vehicle revolution will need the home and workplace installations this announcement will encourage, but also a massive increase in on-street public charging and rapid charge points on our strategic road network. This will give drivers the confidence that recharging will become as easy as refuelling.”

Tesla and founder Elon Musk have been waiting a long time to break through the mainstream market with their electric cars and it seems that the company has finally done it. According to data presented by TradingPlatforms.com, Tesla managed to sell 30% more cars in Q4 of 2020 compared to Q3, making a quarterly total of over 180,000 cars.

Tesla’s Q4 car production and delivery have assured Tesla’s place in the mainstream. In Q4 of 2020, Tesla delivered 180,600 units. This represents a 30% QoQ increase in deliveries and a more than 70% YoY increase. Production levels increased similarly with the total number of cars produced in Q4 a 24% QoQ increase and over 70% YoY increase.