Car manufacturing output fell -18.2% in October in the UK, with 110,179 units leaving factories according to latest figures from the SMMT. This is 24,490 fewer cars than the number produced in October 2019, with the impact of the pandemic and new lockdowns in the UK and overseas stifling demand in many of the key markets.

October’s decline was largely due to falling exports, particularly to the EU and United States, which was down -19.1% overall with a decline of 21,569 vehicles. Shipments to the United States fell by -26.0% and to the EU by -25.7%. Asian markets were better, with exports to Japan and China up 57.1% and 9.7% respectively, thanks in part to less stringent lockdown measures. 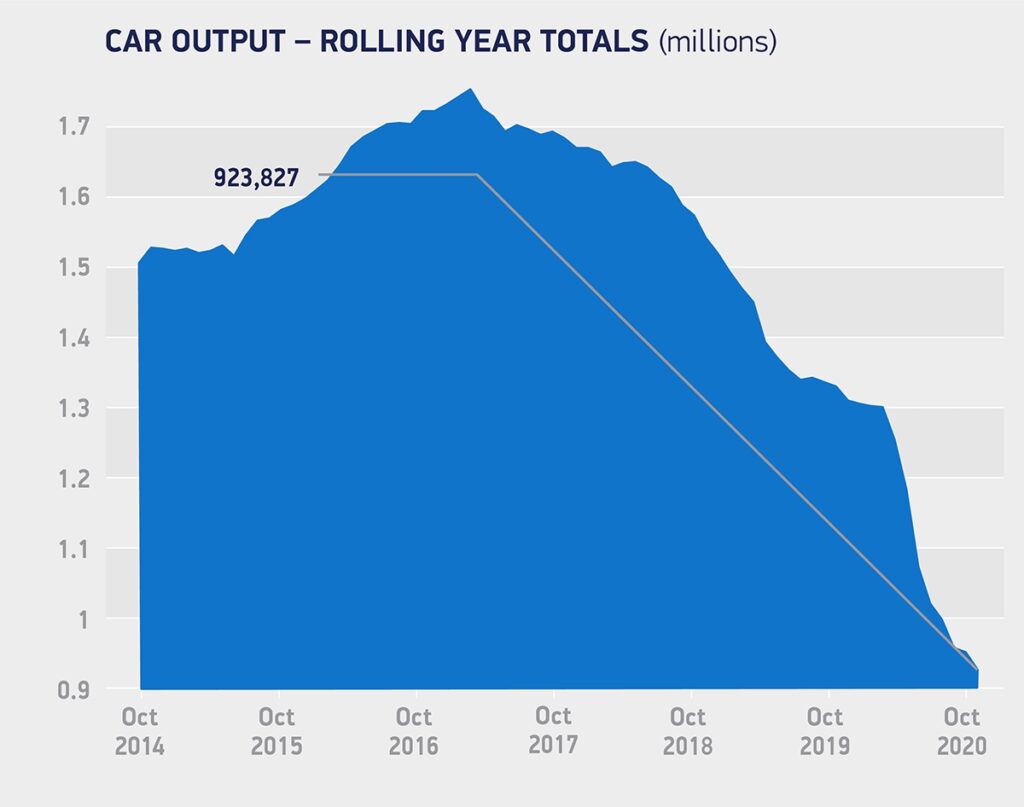 “These figures are yet more bad news for an industry battered by Covid, Brexit and now, the unprecedented challenge of a complete shift to electrified vehicles in under a decade. While the sector has demonstrated its resilience, we need the right conditions to remain competitive both as a manufacturing nation and a progressive market. Yesterday’s Spending Review recognised the need to invest in a green industrial revolution, but this must be at globally competitive levels and equal to the scale of ambition to keep this sector match fit. Above all, we must have a Brexit deal, one with zero tariffs, zero quotas and rules of origin that benefit existing products and the next generation of zero emission cars, as well as a phase in period that allows this transition to be ‘made in Britain’.”

The automotive sector is eager for an agreement of a UK-EU trade deal, with new figures revealing the incredible cost of trading with WTO tariffs long-term. If there was a ‘no deal’ Brexit, production losses could cost as much as £55.4 billion over the next five years. The sooner new trading terms are agreed, and the details communicated, the better as far as the industry is concerned.

Following the news that UK car production in October was down by 18% on last year, GlobalData’s David Leggett commented:

“COVID-19 has battered the UK car manufacturing sector, with output so far this year is down by a third on 2019’s level. The value of lost UK car output this year is over GBP10bn.

“The UK automotive sector faces uncertain prospects for 2021. Top of the list of concerns is the need for a UK-EU trade deal that avoids tariffs on UK-EU shipments of vehicles and parts.

“Such a headwind would damage the UK auto industry’s competitive position just as it contemplates a recovery from the unprecedented drop to volumes this year caused by the pandemic.

“Moreover, the UK auto industry is competing with other nations for vital investment in emerging high-growth advanced technologies such as electrification and automated drive.

“A trade deal with the EU would help to lift confidence and boost investment in UK manufacturing in 2021. Many investment projects put on hold by future EU-UK trading rules uncertainty would get the go-ahead.

“However, a 10% no-deal WTO tariff would add an average GBP2,000 to the price tag of UK-built electric cars sold in the EU, seriously undermining the UK’s future investment case.”

Latest figures from the SMMT show that commercial vehicle production also decreased in October, this time by -25.6%, with 6,761 units manufactured. Output for both the UK and overseas markets declined by -21.1% and -30.4% respectively over post-pandemic recovery concerns as well as being compounded by the looming threat of a ‘no deal’ Brexit.

2,326 fewer buses, coaches, vans, trucks and taxis were built by factories than in October 2019. The number of units manufactured for export also decreased -21.1%, which made up 54.5% of total production in the month. 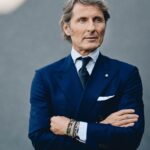 Stephan Winkelmann has been named as the new President and CEO of Automobili Lamborghini S.p.A. effective as of 1st December 2020. He succeeds Stefano Domenicali, who will take over as CEO of Formula 1 starting from 2021. Winkelmann remains President of Bugatti.

“It is a great honour and pleasure for me to lead these two unique companies with their extraordinary automobiles. I am looking forward to the new challenge. Bugatti stands for the best, most powerful, elegant and luxurious hyper sports cars in the world. Lamborghini is the iconic expression of the most exclusive super sports cars demonstrating outstanding design and innovation. Our creativity in both companies is by no means finished and the world is assured of some surprises.”