These figures reflect the slow pace in take up to greener motoring with only 3 percent of car owners saying they will make the switch to electric in the next 12 months, and 11 percent within one to two years.

Of those who said they do plan to buy a new car in the next year, 16 percent intend to buy a hybrid, and only 8 percent saying they would buy a pure electric car. 7 percent will buy a diesel car and 41 percent plan to stay with a petrol engine car. At the moment 2 percent of cars on the UK roads are hybrid and only 3 percent are electric.

Cost is identified by 70 percent of motorists as the primary factor holding them back from making the switch to electric, followed by lack of charging infrastructure and reliability.

“These latest government figures show that the green car revolution is taking its time to get into gear.

“But these latest statistics show cost is probably the biggest factor holding back the switch to green motoring, which is understandable as the country emerges from the pandemic. However, the high percentage of drivers who intend to buy petrol cars compared to electric models shows that concerns about infrastructure and reliability are not going to be easily overcome.

“One positive point to bear in mind for those thinking or worried about insurance costs is that electric car insurance is now more readily available as the majority of insurance providers have added or are in the process of adding electric cars to their offering – making it easier for consumers to shop around and get a competitive premium. 2022 will be an interesting year for electric car growth, hopefully as the economy stabilises post-pandemic, people will be more inclined to splash their lockdown savings on bigger luxury items with an eye on their greener future.”

SMMT statement on the Autumn Budget

“The effects of the pandemic continue to hurt businesses across the sector – supply chain disruption, skills shortages and punitive energy costs. The Budget included some significant steps, most notably in adjusting business rates to allow relief on renewable energy and the extension of the super-deduction. Together with the Global Britain Investment Fund which provides £817m to support the transition of automotive manufacturing and the £620m announced last week for incentives, as well as investment in charging infrastructure, these are a recognition of the importance of the automotive sector and its ability to drive innovation and exports, and to create well-paid, highly skilled, green jobs across the country.

“However, if we are to attract the investment in plant and machinery that a modern, competitive and decarbonised industry needs, a more fundamental change in business rates is still necessary – one that actually incentivises the continued investment that factories need to be at the cutting edge of operational efficiency. The Budget was also a missed opportunity to support the many supply chain businesses which are suffering cash flow shortages due to stoppages arising from the semiconductor shortages.”

BVRLA response to the Autumn Budget and Spending Review

“The Chancellor has missed an opportunity to give the industry essential clarity when it is most needed. At a time when the uptake of electric vehicles is ready to accelerate, the silence around areas such as benefit in kind tax rates is deafening. This only grows fears that rates will be drastically increased down the line.

“BVRLA members had clear asks for this Budget. The Chancellor has failed to give tangible details on these asks, meaning that questions remain over what the Government’s plan is. The Net Zero Strategy last week marks a very positive step in the right direction; what we needed in today’s Budget was more detail. Instead, we have been given headlines that offer no clarity, no foresight and no confidence.” 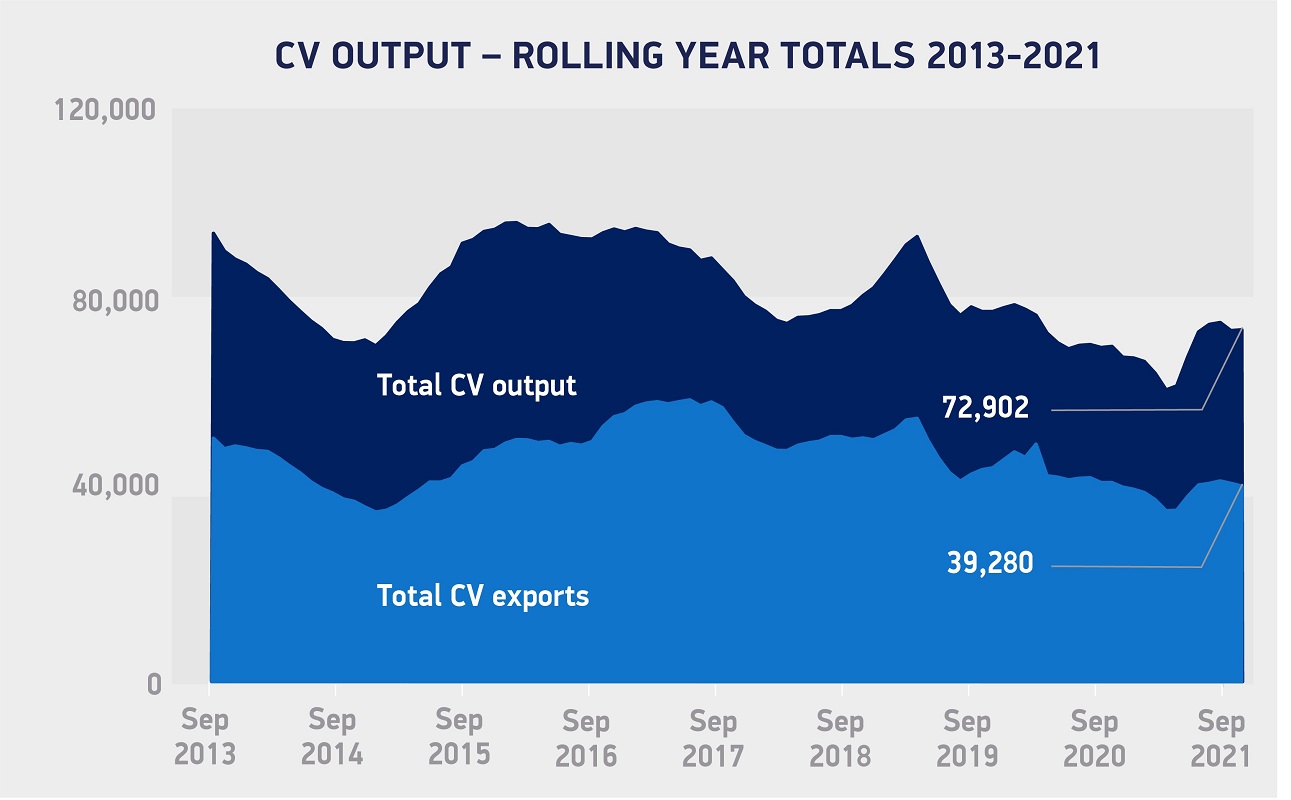 Commercial Vehicle production for September 2021 – Chart courtesy of the SMMT

UK commercial vehicle production increased to 7,799 units in September, according to the latest figures released last week by the Society of Motor Manufacturers and Traders. This follows a production decline by over a third (-35.1 percent) in August, with September seeing a modest increase of 1.8 percent compared to a strong September last year.

Year-to-date, production of CVs in 2021 has increased by 15.4 percent, but this is based on a weak 2020 and output remains down by almost a fifth (-19.5 percent) against the pre-Covid five-year average. The impact of the semiconductor shortage is also reflected in these figures.

UK car production fell -41.5 percent in September, the third consecutive month of decline, with 67,169 cars manufactured, which is the worst performing September since 1982 according to the latest figures released last week by the Society of Motor Manufacturers and Traders.

Output continues to be hampered by production stoppages caused by the ongoing global shortage of semiconductors as well as the loss of production capacity arising from the closure of one of the UK’s larger plants.