GeniePoint is the latest national EV charging network to join Zap-Pay and is currently the fourth-largest rapid-charging network in the UK, excluding the Tesla network, increasing the options to pay for EV charging across networks from within the UK’s leading EV mapping service Zap-Map.

Zap-Map and EQUANS, which is the new name for ENGIE’s services-led activity and the company that owns and runs the GeniePoint network, recently signed the agreement to include GeniePoint in the Zap-Pay partner network with the two companies now working on technical integration, which should be completed this month which will mean that GeniePoint will be fully up and running as an established Zap-Pay partner.

GeniePoint is the fourth company to come online with Zap-Pay and has a network of almost 700 charge points including over 400 rapid chargers in England, Scotland and Wales. The network has chargers at over 200 Morrisons supermarket sites and has recently been appointed as Whitbread’s EV charging partner to install EV chargers across their Premier Inn properties.

Having launched just last year, Zap-Pay is the simple way to pay for EV charging across networks from within the Zap-Map app. The Zap-Pay service also includes a 24/7 multi-lingual helpdesk for all payment-related issues, provided by EVA Global, an international managed services provider that specialises in the electric mobility industry.

Zap-Pay avoids the hassle of using different payment methods across all the various networks through its single-app payment system that uses a credit or debit card to pay for charging. With GeniePoint joining the Zap-Pay network, the announcement represents a significant step towards convenient, trouble-free charging for EV drivers right across the UK.

Barclays and Goldman Sachs were the top two mergers and acquisitions financial advisers in the automotive sector for H1 2021 by value and volume. Barclays advised on three deals worth US$7.6bn, while Goldman Sachs led in volume terms having advised on four deals worth US$6.1bn. According to GlobalData there were a total of 404 M&A deals announced in the automotive sector during H1 2021.

“None of the advisers involved in M&A transactions in the automotive sector were able to register double-digit deal volume. Moreover, the total value of deals advised by some of the advisers featuring in the list of top ten by volume did not even cross US$100m.

“However, both Barclays and Goldman Sachs managed to advise on some of the billion-dollar deals (valued more than or equal to US$1bn). While Barclays went ahead to lead by value, Goldman Sachs, apart from leading by volume, was also able to occupy the fourth position by value.” 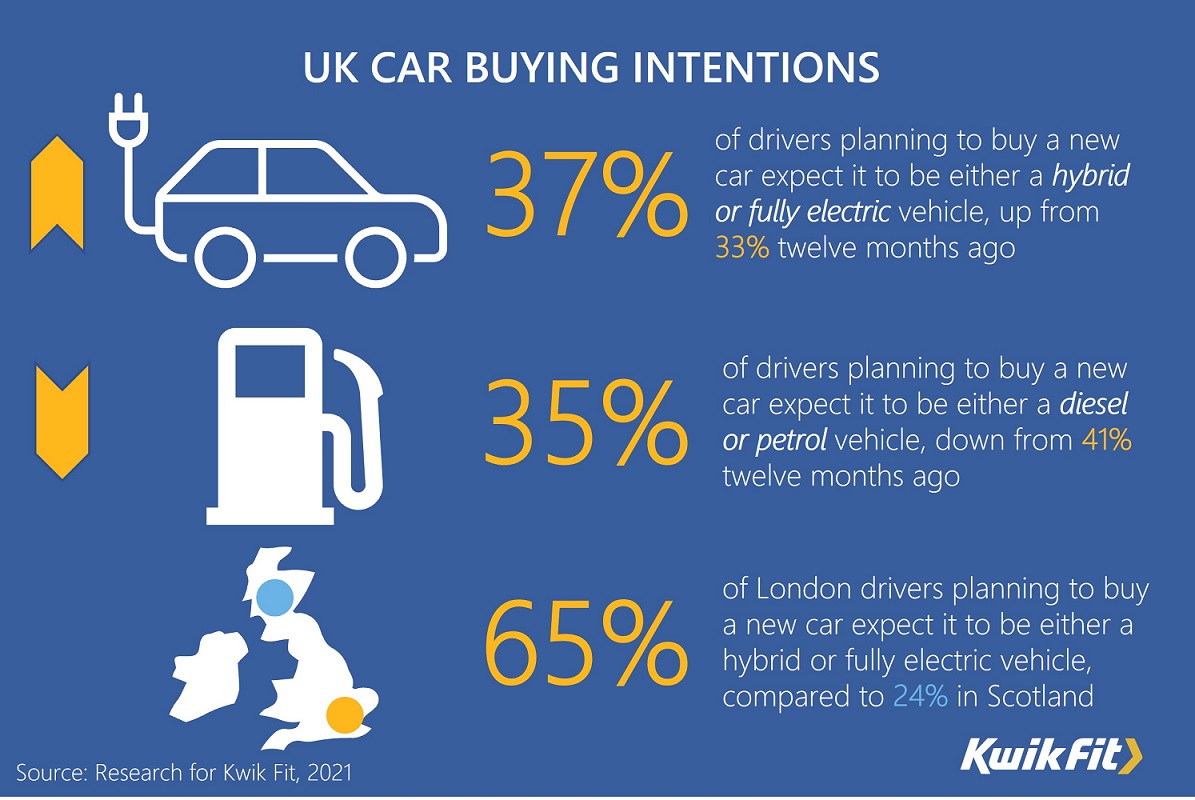 More drivers expect next car to be electric or hybrid

New research carried out for Kwik Fit released last week revealed that the number of drivers expecting their next car to be fully electric has increased by 32% in the last twelve months.

The study revealed that 11 per cent of drivers who are planning to change their car expect to replace it with a fully electric vehicle, an increase from 8 per cent of drivers a year ago. When you include hybrid vehicles, the number of drivers anticipating opting for a low emission model increases to 37 per cent, compared with 33 per cent over the last 12 months.

In the last 12 months hybrid or fully electric cars have overtaken petrol and diesel models as the next vehicle of choice for drivers. Whereas 12 months ago, Kwik Fit’s research showed that the 33 per cent of drivers who expected their next car to be a low emission vehicle were outweighed by the 41 per cent who said their next car would be petrol or diesel.

Drivers in London are the most likely to consider switching to either a hybrid or fully electric vehicle, with 65 per cent of drivers saying they are doing so. The next highest region is the North East, with 49 per cent, while the lowest is Scotland, where only 24 per cent said they would opt for a low emission vehicle.

The research indicates there is still a challenge ahead for policy makers wanting to encourage drivers to switch to EVs as soon as possible, as although low emission vehicles as a whole have overtaken diesel and petrol models as planned purchases, only one in nine drivers (11 per cent) planning to buy another vehicle are considering a fully electric car.

The biggest deterrent to switching to an EV varies by region, but the lack of fast charging points is a significant factor, cited by 38 per cent of drivers. This figure increases to 51 per cent in Wales and 50 per cent in Yorkshire. The increased cost over an equivalent petrol or diesel model is the greatest barrier in the North East, South West, South East and Scotland. However, for drivers in the West Midlands and the East of England, the biggest concern is the perceived restrictions on the range of an electric car.