Volkswagen’s vision of the future – the Mobile Charging Robot

Volkswagen Group Components has provided a first glimpse of the prototypes of its mobile charging robot, which is just one of the company’s visionary charging concepts that will hopefully expand the charging infrastructure and capacity in the coming years.

The idea is that these new robots will be fully autonomous and able to charge vehicles in specific parking areas, such as underground car parks. As Thomas Schmall, Volkswagen Group Components’ CEO explains:

“A ubiquitous charging infrastructure is and remains a key factor in the success of electric mobility. Our charging robot is just one of several approaches but is undoubtedly one of the most visionary.”

“Setting up an efficient charging infrastructure for the future is a central task that challenges the entire sector. We are developing solutions to help avoid costly stand-alone measures. The mobile charging robot and our flexible quick-charging station are just two of these solutions.” The business unit is currently working on a complete DC charging family. The flexible quick-charging station will be launched onto the market in early 2021. For several weeks now, the DC wallbox has been trialed at different company’s German production sites. The mobile charging robot has successfully reached prototype status and will now be comprehensively further developed. One of the prerequisites for market maturity is Car-to-X communication to facilitate the autonomous charging process. 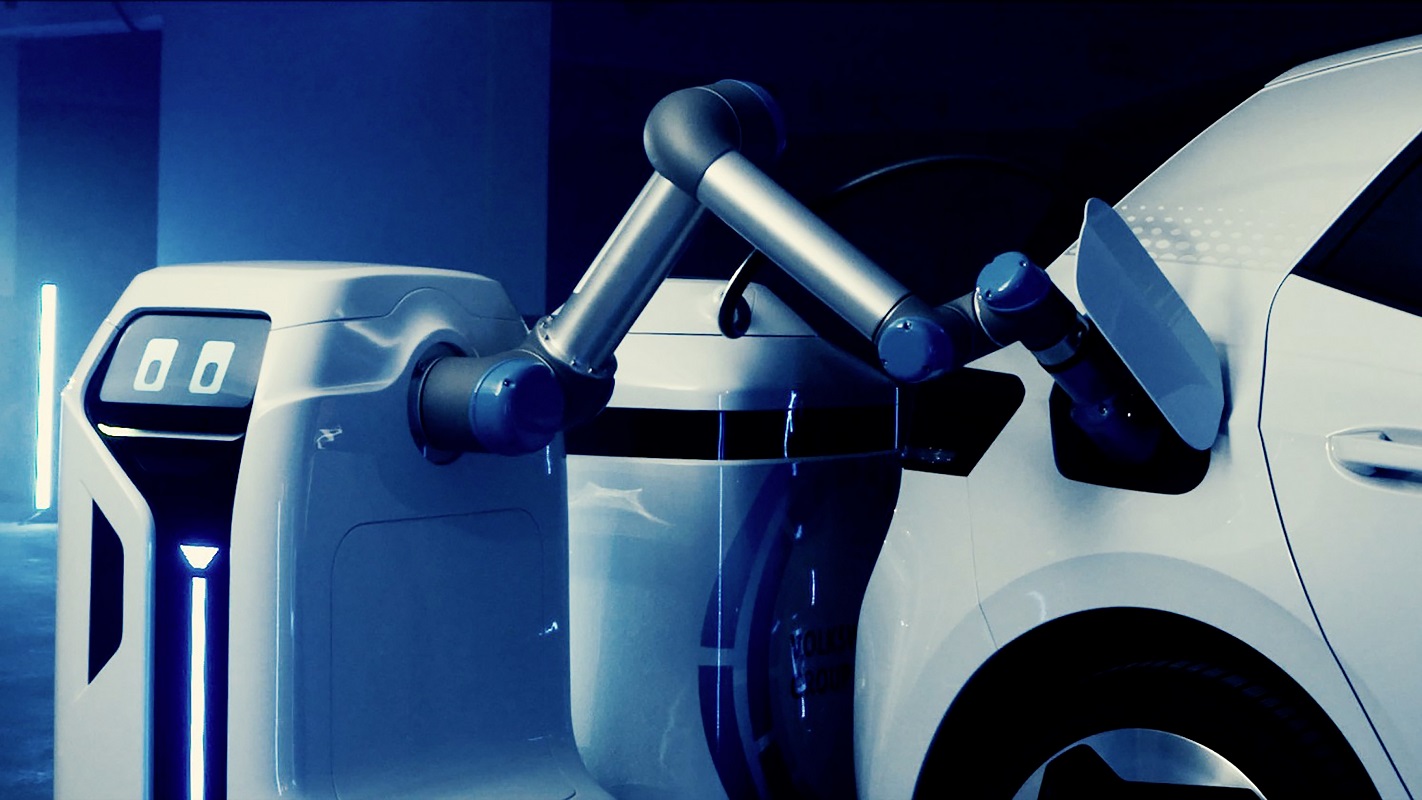 “In view of the crucial importance of this issue, in future Volkswagen Group Components will be amongst other things responsible for all Volkswagen Group charging activities and charging systems. The intention is to integrate the charging robot into an overall concept that will focus on the long-term success of electric mobility, and thus the electrification of transport. “Establishing a charging infrastructure is a fundamental prerequisite for this. But it needs to be demand-led and efficient.”

The charging robot is activated via an app or Car-to-X communication and independently steers the vehicle to be charged, communicating with it directly, from opening the charging socket flap to connecting the plug and decoupling it. Interestingly, the entire charging process takes place without any human interaction.

“Our developments do not just focus on customers’ needs and the technical prerequisites of electric vehicles. They also consider the economical possibilities they offer potential partners.”

This new technology will enable car park operators to quickly and efficiently “electrify” every parking space using the mobile charging robot, reducing the need for any new construction work and in so doing reducing the potential cost of any infrastructure.

A new poll of Zap-Map’s community of electric vehicle drivers has revealed that over 90% of drivers do not intend on replacing their current EV with a petrol or diesel vehicle when it’s time to change their car.

This shows a fundamental change in consumer attitudes in favour of more environmentally friendly vehicles. Over 2,000 people responded to the poll in November 2020, with 91 percent saying “no thanks” to replacing their EVs with a petrol or diesel vehicle. Whilst less than 1 per cent planned a return to petrol or diesel, 9 per cent were undecided.

What was interesting is that the majority of the respondents were first-time EV drivers, with 73 per cent saying that their current vehicle was their first EV. Driver satisfaction was also higher for both battery electric and plug-in hybrid vehicles, with EV drivers reporting a satisfaction score of 91 out of 100 compared with only 72 for petrol or diesel vehicles.

These results come at a time of record-breaking sales for electric vehicles with latest figures showing year-to-date 9.7 per cent of all new car sales had a plug, compared to 3.2 per cent in 2019 and 1.1 per cent in 2015.

“Our latest poll shows the strong and enduring impact of switching to a clean car. The evidence in favour of electric vehicles grows more compelling with each one of our surveys, even in a year as disruptive as 2020.

“The challenge for the automotive industry is to take advantage of the opportunities that EVs present, not only in terms of the rapidly expanding range, but also ensuring that sales staff are knowledgeable enough to present the benefits to their customers. 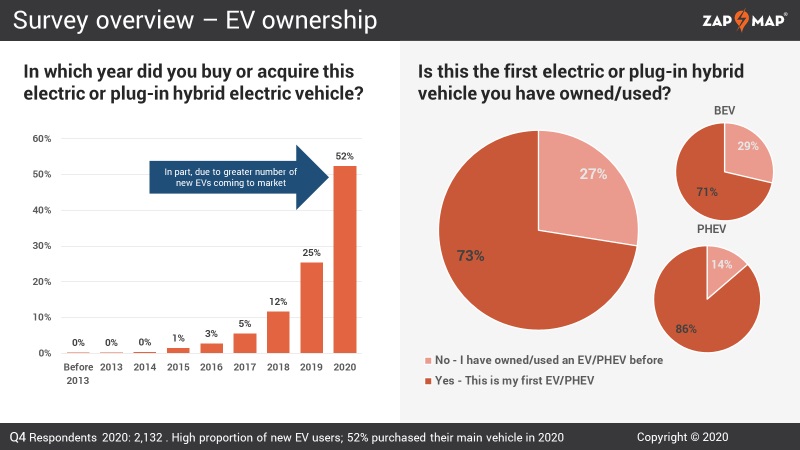 “At Zap-Map we monitor the growth of the charging network and it’s clear that many of the historical challenges of owning and running an EV have fallen away. The dramatic growth in EV sales in 2020 is one of the good news stories to come out of this difficult year for the car industry.”

“While the challenge is often convincing owners of petrol and diesel vehicles to switch to an electric vehicle in the first place, this data shows that once people have done so they seldom look back, which is also positive news for manufacturers that are investing heavily in electric vehicles and cleaner technology.

“While would-be electric car drivers might worry about range anxiety, they should also be aware that the number public charge points is increasing rapidly and infrastructure continues to improve. They should also remember that the vast majority of their journeys are unlikely to be over several hundred miles meaning that for day-to-day travel, operating an electric vehicle is a clean and cost-effective option.

“These figures show the momentum that is behind getting drivers into electric vehicles, something that is likely to build as we move closer to the end of the sale of new petrol and diesel cars by 2030. We are doing our bit in giving drivers confidence they can make the switch, with 80 of our patrol vans now fitted with mobile emergency charging units, and half our fleet fitted with All-Wheels-Up recovery systems, removing the need for drivers to wait for a flatbed if they need a tow.”